Election Results Are In!

The elections results are in for all board positions. Please see your new officer roster by clicking here!

The AZIAAI hosted its first Evidence Collection Technician practicum yesterday! It was a great opportunity and investigators throughout the valley showed up to increase their knowledge about evidence collection. Examples of evidence collected in the practicum included fibers, saliva, floor and sub-floor, fingerprint and impressions left on paper.

Special thanks to Stephen Johnson, our training coordinator and Keith Paffrath with the IAAI for helping to set this up! Our goal is to repeat this practicum yearly for those who need it. There are several advantages to having this designation, including:

If you are not already on our email list, please do so to stay up to date with the latest training opportunities and events!

The AZIAAI Annaul Confrence is right around the corner! Also dont forget about Arson III coming in September!
​Please check our

This Year's seminar is packed with great content from many amazing speakers!

Fatal Fires and How the Body Burns

In 2000, Elayne Pope began researching the burned bones from forensic cases and how the human body is affected by a variety of fire environments (vehicular, structural, and outdoor). Dr. Pope will speak on her use of Cadavers, to document the burn patterns that occur during these different types of fires. Take an early peak with www.burnedbone.com, a professional website that details more of Dr. Popes research history and progress with burned human remains.

Louis Taylor and the Pioneer Hotel

A hotel fire that occurred on December 21, 1970; changing building code standards nationwide. The arson killed 29 people and was started by sixteen year old, Louis Taylor. The fire contained multiple areas of origin on the 2nd floor and Taylor was charged with 28 counts of murder, with the last death occurring after Taylor was charging. February of 1972, Taylor began his trial and was convicted on all counts but, in 2012 The Justice Project filed appeals to overturn the conviction based on “new science” in the fire industry. You will not want miss how the State responded and the outcome of Taylor's case.

On November 1st of 1996, Gary Triano was killed by a remote-detonated bomb, purposefully placed in the front seat of his car within a duffle bag. The investigation spanned a decade, over multiple agencies and was finally solved after airing on an episode of America's Most Wanted. Come see the mock bomb, used by prosecutors to convict Ronald Young, a hit man in Florida who sang like a canary. Young kept documentation and recordings of the woman that hired him, Triano's ex-wife.

Media impact and the Innocence Project

Ed Nordskog will cover the pitfalls that investigators and prosecutors run into when they deal with these very organized and highly influential groups. Mr. Nordskog will speak about: Joann Parks, a mother who murdered her three children in 1989 with fire, was convicted, and how the California Innocence Project became involved in 2012. Janet Dixon, a woman in her twenties who poured gasoline over the head of an 8 year old girl and set her on fire, killing her in 1980. In the case, The Loyola Project Innocence (LPI) found "experts" that stated there is no scientific proof of gasoline at the scene. The final case involves a 16 year old boy in Chicago, conficted of murder by arson 25 years ago. Again, with the help of LPI, Cook County Prosecutors dismissed the charges without holding hearings. Now, the boy is suing the investigators involved and the families of those that have since deceased.

Please see the "Speakers" page for the full speaker bios. They are incredibly seasoned and so capable that we could not fit it on one page!

Registration for the conference includes dinner to our Annual Banquet and Awards Ceremony on Thursday, July 22nd. Any extra guests, not registered for the conference, will be charged $25.00 each for the dinner.

You CANNOT afford to miss this training!!!! There will also be a board meeting on Tuesday night, July 20th, at 6pm. Check with the front desk for the meeting room location.

Fire Arson Investigation III is the third of our four-part series for Fire Investigators. This class is from September 27th to  October 1st in Flagstaff.

This training and material is useful to law enforcement personnel, prosecutors, insurance investigators, claim adjusters, and fire service personnel with responsibility for fire cause determination. This is a hands-on class consisting of some classroom and the field portion of the curriculum, examining and recording the fire/arson scene.

You will be assigned to an arson task force to investigate a crime scene.

This course is tested, all class sessions must be attended for certification. 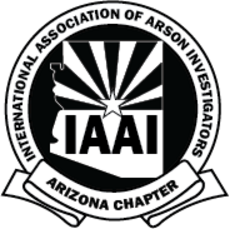 Welcome to the Arizona Chapter of The International Association of Arson Investigators (AZIAAI).

If you would like more information on fire/arson investigations, or the services the AZIAAI provides please contact our communications director. We welcome media inquiries or requests as well as public requests for information.

Public notice is given that the Arizona Advisory Committee on Arson Prevention posts meeting notices at the Maricopa County Courthouse located at 201 W Jefferson Phoenix, AZ 85003.